Thomas Struth's photograph from his series of Museum pictures shows a gallery in Madrid's world-renowned Prado Museum. People both real and painted inhabit the room. The real people are standing in the foreground, two young women seen from the right in profile and presumably looking at a painting not pictured in the photograph. They are tourists from Asia dressed in casual Western wear and carrying the necessaries required in the course of visiting a city and a museum. One of them, standing further back in the central axis of the picture, is holding an audio guide, an indispensable device nowadays for contemporary museum goers. It is barely visible but marks the exact line between the corner of the room and the panelling. It also marks the point of maximum sharpness, making the inscription on the technical device legible: Museo Nacional del Prado.

Behind the two women we see paintings by the Spanish artist Diego Velázquez (1599-1660), showing full-length portraits of dignified grandeur, to the left the Greek fabulist Aesop (probably 6th century BC), of whom no actual likeness has survived, and to the right Philip IV of Spain (1605-1665) from the house of Habsburg, who had appointed Velázquez his court painter. The attire and attributes of the two figures reveal their social and spiritual status. The hoary melancholic poet with torn cloak and book; the young King in noble hunting attire and sporting a weapon. Struth aimed his camera, in advance, at the two paintings and the motion detector mounted in the corner of the room between them. Having come across the paintings by chance, the two young women take no notice of the camera. They unwittingly trigger the release at the right moment.

Struth's photograph permits the simultaneous anthropological comparison of people from widely divergent places and times under the aspects of cultural difference and global mobility. Visitors to the museum in Vaduz may identify the tourists as their deputies. They may not know who Aesop and Philip IV are, but they can still establish human contact because the two gentlemen meet the gaze of all those who look at their utterly disparate faces. 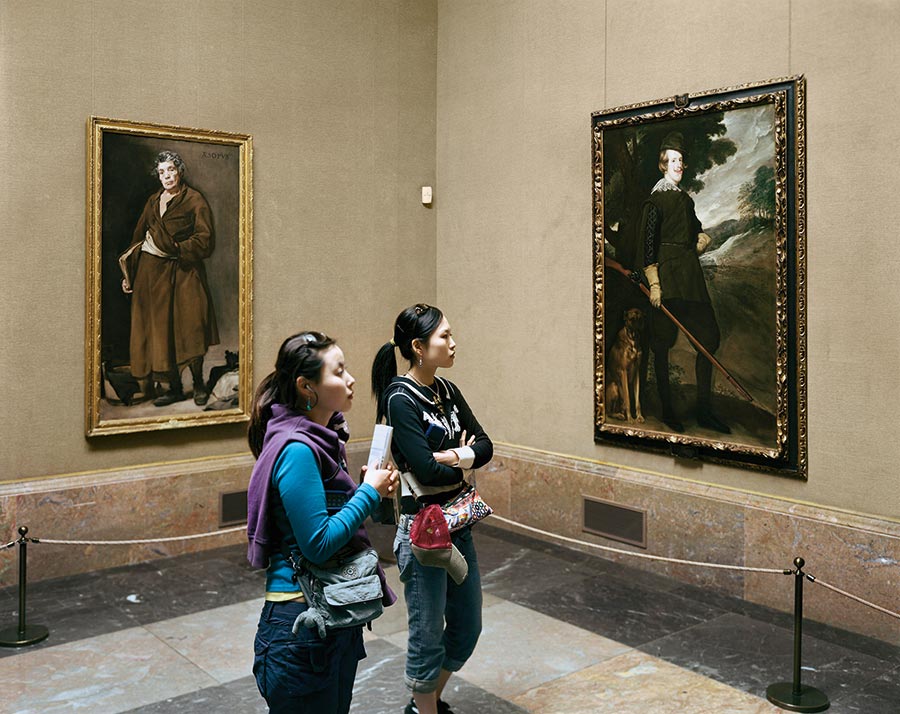