In a review of the Salon d’Automne written in 1911, the critic Louis Vauxcelles characterised Léger’s work as “tubistic”. His neologism pinpointed an essential distinction from the Cubist approach to subject matter, which no doubt influenced, though it did not really accord with Léger’s artistic ideas. Unlike the manner in which analytical Cubism broke down its subject matter into surfaces and planes, Léger had consistently gravitated toward cylindrical, three-dimensional representation, accompanied by a certain planarity of detail. The “tubist” idea of representation basically informed all of his subject matter, which was drawn from classical themes and included the representation of the human body.

Léger was both fascinated and threatened by the technological and mechanical invasion of modern life. Human beings held sway over gigantic machines, yet they were nothing but machines themselves, whose parts obeyed mechanical laws. Despite the destructive violence of mechanized warfare introduced in the First World War, Léger did not abandon his open-minded approach to technology and mechanics. Such developments did, after all, testify to human progress. What’s more, they were compatible with a de-individualized image of humankind inspired by the idea of equality and could easily be brought to bear on “tubist” notions of form.
Women as the sole subject matter of a painting appear in Léger’s oeuvre as early as 1912/13. The artist increasingly pared down his formal vocabulary in the course of the 1920s, rendering his figures in archaic “blockiness”. As in La Danseuse (The Dancer, 1929), he depicted women alone or in pairs against a single colour background. The half portrait of the dancer is set apart as if in relief against the vibrant shading of green mixed with white and yellow, generating an impression of limpid nature. Her limbs are clearly distinguished through contrasting ochre and white. Her black hair cascades in large undulating waves over her shoulder and back. A cloth, striped blue and white in beautiful contrast to the green and ochre, is draped across the lower part of her otherwise unclothed body. Her right hand reaches into the cloth; her left hand is resting on her forehead. Leaning back with her head slightly inclined to the left, she gazes gravely but impersonally as if lost in reverie, in disinterested appreciation of an object. One might imagine her sitting rather than standing, but certainly not dancing. Léger has undoubtedly taken inspiration from Picasso, as demonstrated by the latter’s drawing of Three Dancers (Musée Picasso, Paris, Zervos XXIX, 432, 1919/20), whose voluptuous limbs lend a somewhat ponderous feel to their ballet poses. The attitude of head and arms in particular prompt direct comparison with Léger’s figure. For poses of this kind, Picasso in turn found inspiration in press photographs for Ballets Russes.
La Danseuse could also be called Buste de femme (Bust of a Woman), as in the pencil drawing of 1931 in which Léger placed the same figure at the corner of an interior. The bared left breast in the painting has become an apple that she holds in her right hand – both versions equally symbolize seductive femininity. The main theme of the painting, however, is no doubt the sculptural presence of the human body as a synthesis of line, form and colour. 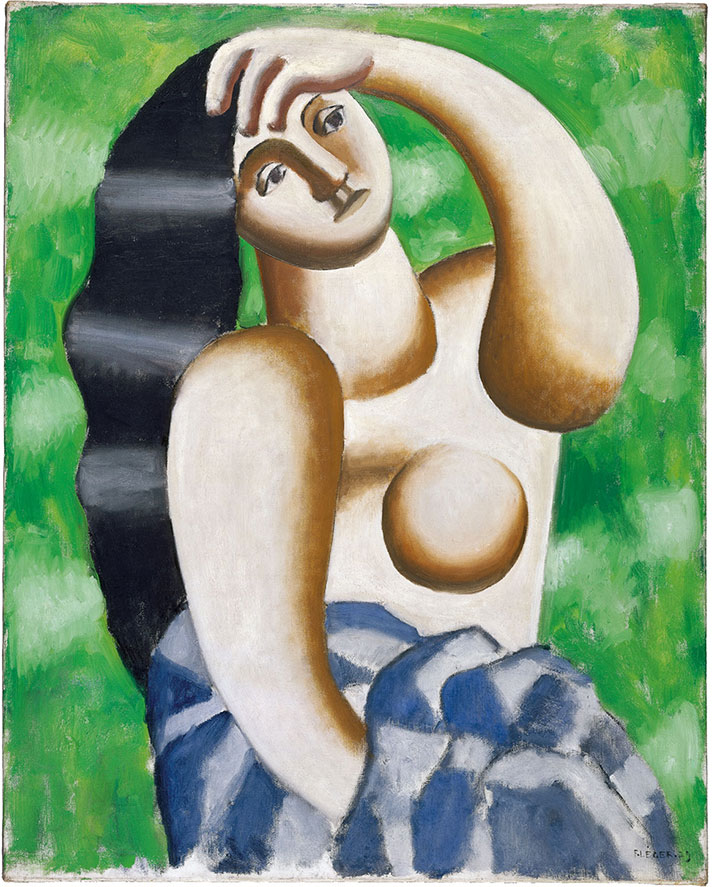 Copyright of images
© Callum Innes
© Thomas Struth
© 2021, ProLitteris, Zurich, for works of:
Alexander Archipenko
Karol Broniatowski
Yves Tanguy
Germaine Richier
Leiko Ikemura
All rights reserved. Without permission reproduction and any other use of the work besides the individual and private consultation is forbidden.